skip to main | skip to sidebar

This should tell you something about the women in my family...

From my grandma, last night at Thanksgiving: "Well, I could be wrong, but I'm not."
Posted by Jessica Fletcher-Fierro at 10:22 AM 1 comment:

I just hosted my first successful Thanksgiving dinner. I made a turkey, gravy, stuffing, mashed potatoes, green bean casserole, and cranberry sauce all from scratch. I know many of you do this every year, but I am quite pleased with myself, and I must say, I think my dad would be proud.
Also, the pictures loaded backwards. So travel back in time with me, through el Thanksgiving de Fletcher. 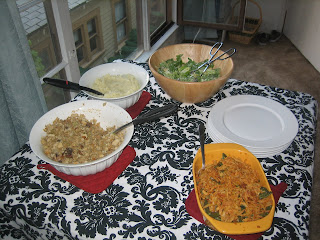 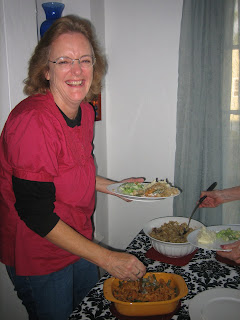 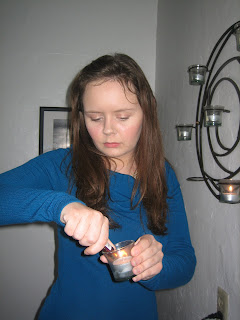 Erin came over to help me get ready. She's an excellent candle lighter/dish washer/store-runner. 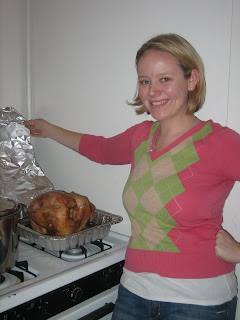 The turkey and me (turkey on left) 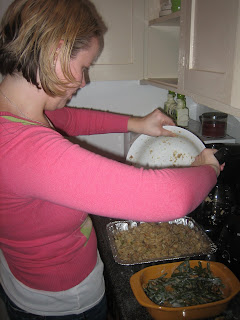 This is how I feel about flying:

From Anne Lamott:
"My idea of everything running smoothly on an airplane is that once in the air, A) I not die in a slow motion fiery crash or get stabbed to death by terrorists, and that B) none of the other passengers try to talk to me."
Exactly.
Posted by Jessica Fletcher-Fierro at 7:40 PM 1 comment:

Any advice or resources?

So, I am going to attempt to write a short story over Christmas break. I have never attempted this feat, so I will take any advice anyone would like to give me. I am remembering Anne Lamott's advice that writing always starts with "shitty first drafts," though. So that should help me feel better about struggling through the process.
I have been writing a little more lately. I really do enjoy it. My breakup music essay is in rough draft state. I journaled on the plane to and from DC. I made notes galore for my short story. I don't see it as a career option for me,  just an amusing hobby. Except that I am sort of an ambitious person, and have fantasies of being published in The New Yorker and that somehow transitioning to being on Oprah to be interviewed about my one published story. That's how it works, right? :D
This, would be called rambling. Enjoy, my friends.
Posted by Jessica Fletcher-Fierro at 8:02 PM 6 comments:

It is only in hindsight that I realize that when it comes to knowing when to say “when” with my ex-boyfriend, I was That Girl. Ugh. The one you never want to be. You know, she’s the one in the horror movie who decides to leave the secure cabin with only her flashlight while the killer is on the loose. Some people yell, “No! No! Don’t do it!” at the screen. They empathize, seeing that she just doesn’t see the reality of the situation she is in.  I, on the other hand, was usually the one leaning over to my friend and whispering my judgment, “What a moron. Who would be stupid enough to do that?”

Apparently, I was stupid enough to do that. Twice.

The first time, there was some mutual hemming and hawing. Did we really want to do this? Was breaking up the answer, or did we just need to think about some things? So, we took a month off, to ponder our relationship.  While apart, I pondered many things, but apparently did not spend enough time pondering the times he told me I just wasn’t his type. Or that he thought I should dress sexier when we went out (I did remind him that going to Red Robin is not really considered "going out."). Essentially, he wanted to change me.  But, blinded by the drunkenness of first love, and armed with my flashlight, I left the cabin to wander around in the woods.

Three weeks later, he broke up with me again. I yelled at him, slammed a door in his face, and told him we would never be friends. Two whole weeks later, I decided that enough time had passed for being friends to work out just fine. This time, I didn’t even bring the flashlight.

Regular friends lasted about a week. Then, we made out in the car. And as movie-goers everywhere yelled, “No, no! Don’t do it!” I entered the dreaded “friends with benefits” stage. That’s what I call it now-because that’s what it was. At the time, I called it, “Just seeing what’s going to happen,” or even better, “It’s complicated. He needs to take things slowly and not put any labels on this.”

Oh, yes. I was That Girl. The one I had silently judged for years, seeing her as weak and pathetic.  Internally rolling my eyes when she tried to explain why she was still with that same boyfriend we’d all told her to break up with.

And then, finally, enough was enough. I locked the door to the cabin, put the chair up against it, and called the cops. But, even though I finally wised up, I learned not to judge the girl with the flashlight. Sometimes, you just have to see for yourself what’s out there.

Jessica Fletcher-Fierro
Long Beach, CA
I teach middle school English, and I love to share ideas and curriculum with other teachers.

The blogs that love me.